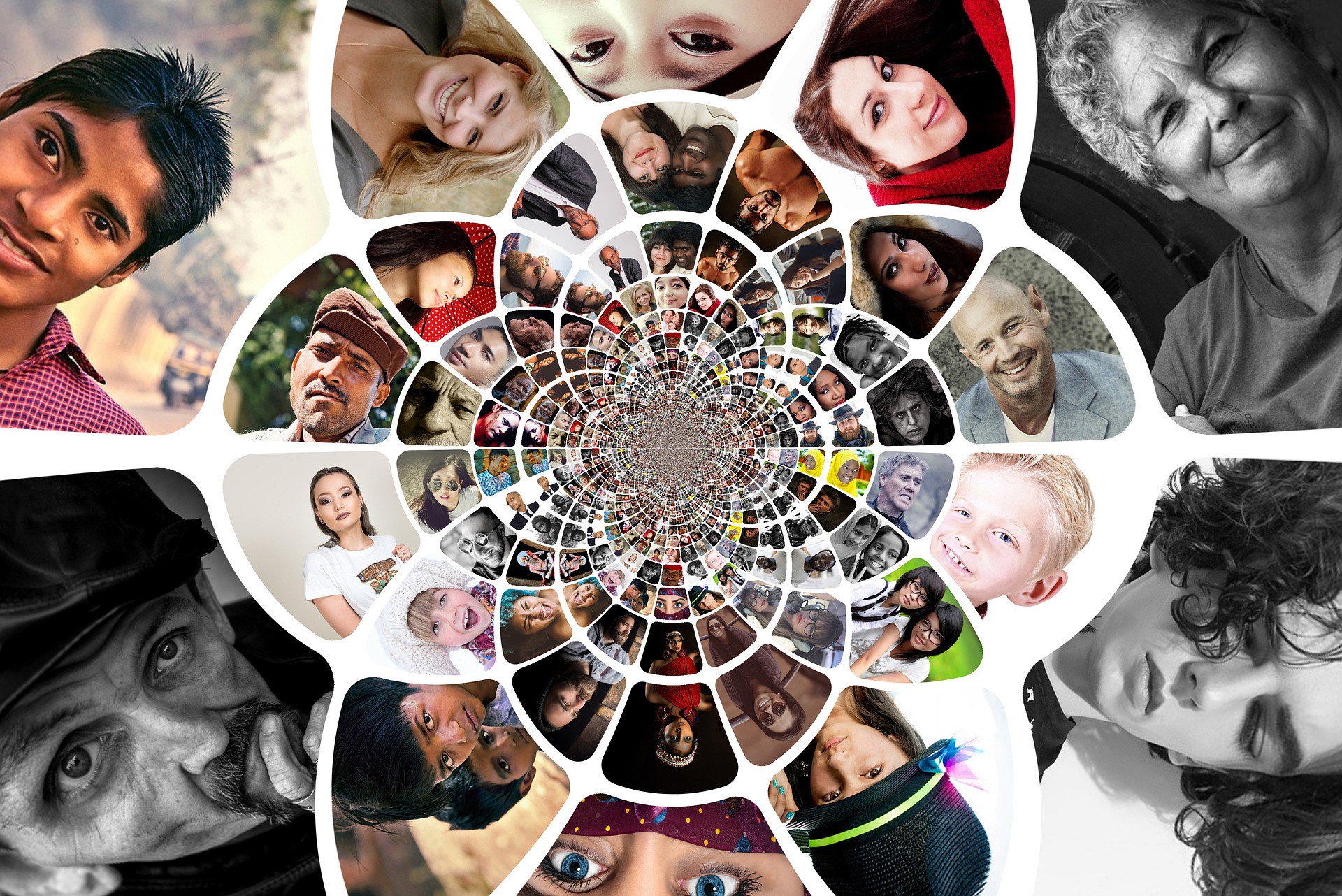 There have been many articles published recently concerning high Net Overseas Migration to Australia.

This article looks at recent ABS data on Net Overseas Migration and discusses the changing mix of settlement in Australia by nationality. 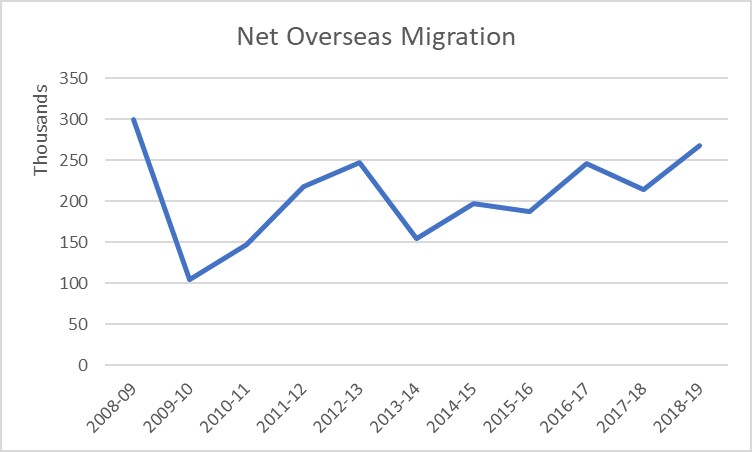 The below interactive chart allows you to view the trend for each country for each financial year.

The following data can be viewed:

The main outflows were Australians (390,000) and US citizens (27,500) and Japanese (1,600). Whilst it’s not unusual for Australians to spend time overseas, it is surprising that so many US citizens have departed Australia – most of this has occurred since the 2015-16 financial year. This has been driven by a large increase in short-term resident departures, suggesting that this may be due to sponsored employees departing Australia.

The chart below lists the top 10 countries by the increase in NOM in 2018-19 versus 2008-09. That is, the countries where the flow of people to Australia has increased the most: 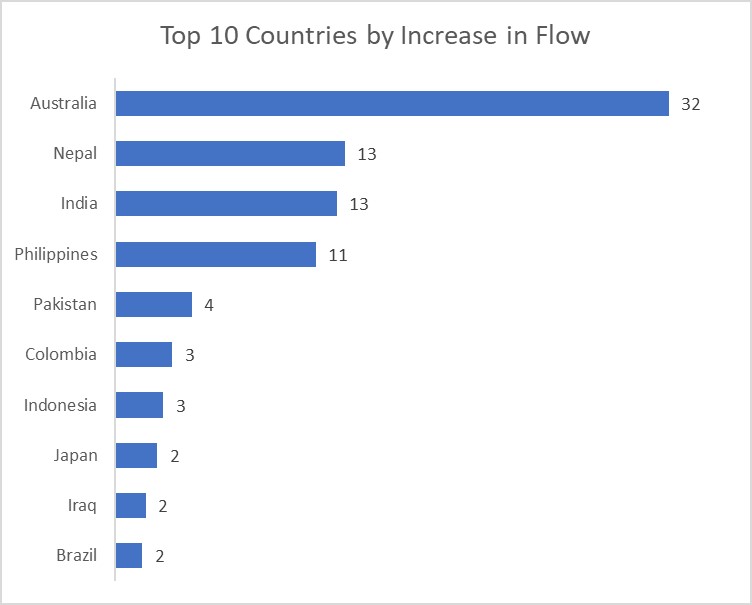 28,000 more Australians returned home than departed in 2018-19 – this is very much against the usual trend. On average, 35,000 more Australians departed Australia than returned over the 11 year period. This was due to short-term trips so is unlikely to be indicative of a significant trend. It could for instance be a timing issue due to a temporary slowing of growth in the number Australians travelling for tourism. The number of short-term departures of this nature grew from 5.1 million in 2008-09 to 9.5 million in 2018-19.

Apart from Australians, Nepal had the highest growth in annual flows in the last 11 years – more than doubling from from 11,000 per year to 24,000. This is likely due to increased numbers of students from Nepal.

India had the next highest growth, albeit from a much higher base of 64,000 to 76,000. This was likely driven by both increases in student numbers and employer sponsored visa numbers.

Philippines increased annual flows from 18,000 to almost 30,000. In this case, the increase appears to be due to increased number of short-term arrivals not being balanced by short-term departures. This suggests that Philippines are increasingly arriving on visitor visas and applying onshore for further stay in Australia.

On the other hand, there were large decreases in the inflows for certain countries. The chart below looks at the countries where the flow has decreased significantly between 2008-09 and 2018-19: 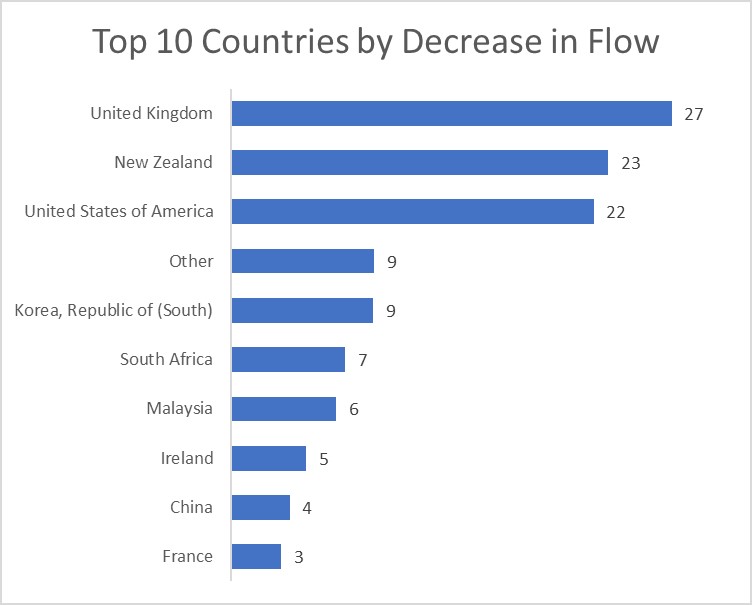 The number of New Zealanders settling in Australia has also slowed to a trickle – net arrivals decreasing from 27,000 in 2008-09 to 4,000 in 2018-19. This is most likely due to relative economic conditions in Australia vs NZ.

Apart from the UK and NZ, there have been large reductions in flows from Korea, South Africa, Malaysia, Ireland, France, Taiwan and Thailand.

Many recent articles have noted the increase in Net Overseas Migration, and it is true that NOM is currently at a high level. This is masked somewhat by a large contribution by Australian citizens returning home.

However, more detailed analysis shows some interesting trends – for instance the number of people settling from the UK have decreased sharply and is unlikely to increase without changes to visa requirements. US nationals have also been departing Australia in large numbers since the 2015-16 financial year, and the flow of New Zealanders has slowed considerably.

Source countries for settlement are increasingly South and East Asia – with India, China, Nepal, and the Philippines contributing significant numbers.

A decrease in flows from China may indicate that a slowdown in international education may be in the wings.