Which Visa Types Contribute Most to Net Overseas Migration?

Migration makes a significant impact on Australia’s population, with more than 28% of people living in Australia having been born overseas.

Australia has one of the most rigorous permanent migration programs in the world – very selective and subject to an annual cap for each visa type.

This article looks at the main visa types which have contributed to Net Overseas Migration (NOM) in the last 10 years.

In recent years, this trend has accelerated, with the ratio rising to 3 to 1 in Calendar Year 2018, and with cuts announced to the permanent migration program, this is likely to continue. 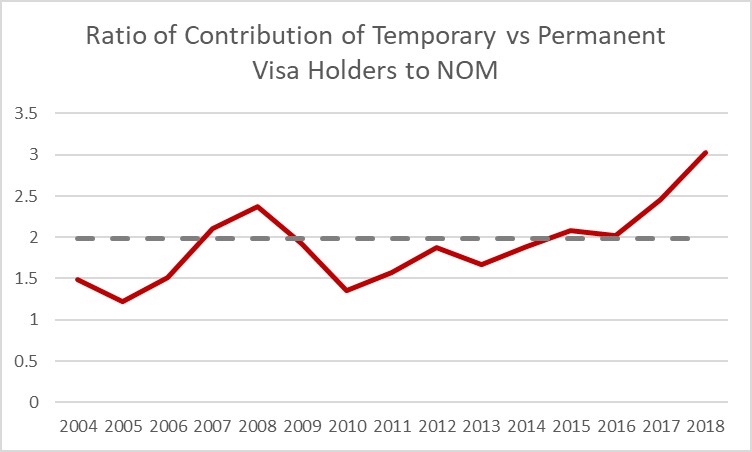 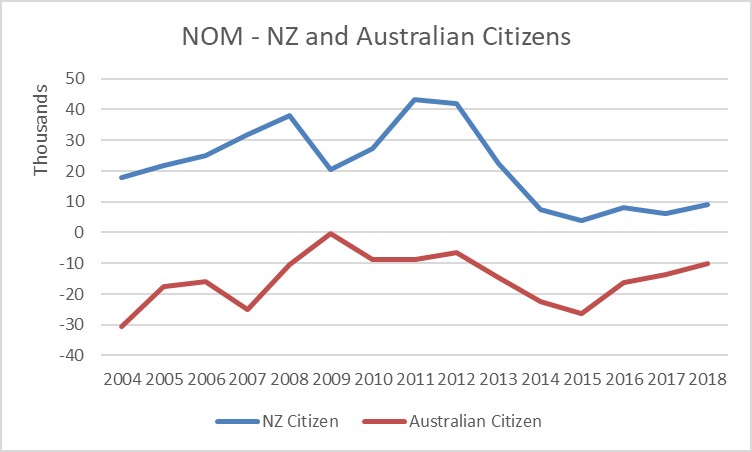 This would indicate that skilled migrants tend to travel worldwide to where their skills are most in demand, even if they arrive in Australia on a permanent visa. Humanitarian entrants, on the other hand, tend to stay in Australia once they arrive. Given that they are typically fleeing persecution in their home country, this makes sense. It would also justify government funding for settlement assistance as they tend to remain in the Australian community longer than skilled or family sponsored visa holders.

Despite the intense public scrutiny, temporary employer sponsored visa holders made up only 12% of the contribution to NOM, less than working holiday makers at 20%.

Visitors made up 27% of the contribution. This is difficult to understand as visitors can typically stay only up to 3 months in Australia. This may well be due to an increasing trend of certain visa holders travelling to Australia on visitor visas, then applying onshore for longer stay visas.

The only net outflow was the “Other Temporary Residents” category. This category might represent bridging visas holders who depart Australia having been unsuccessful in their application for further stay in Australia.

Within the permanent migration program, the humanitarian (refugee) program contributes to NOM far in excess of its share of the migration program. This is most likely due to refugees being unlikely to resettle outside Australia, and suggests that resources assisting them settle in Australia are certainly justified given their longer term residence in Australia.

The above analysis reinforces the view that temporary visa holders are driving population numbers in Australia, and that many of these do not hold employer sponsored visas. Many will have work rights in Australia, so employers need to be vigilant in ensuring that all their staff have appropriate work rights.

Find out more about vSure’s software

If you are an Employer with under 10 employees

If you are an employer with 10 or more employees